Columns of the Platerías façade 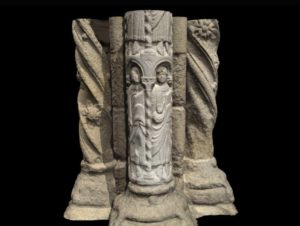 The Platerías façade is the only one of the cathedral’s medieval façades that has survived to this day, although many interventions and additions from other cathedral spaces have modified its original appearance. In this puzzle, which includes some of the best samples of Compostela Romanesque sculpture in its tympanums, frieze, and jambs, its eleven columns organized according to the 3 + 5 + 3 sequences often go unnoticed. They frame the bifora cover and function as a seat for the upper bodies.
The four innermost columns are smooth granite, the four in between are of the same material and have a helical plant decoration and, finally, the three main ones are made of marble and have several sections that include, within architectures, figures of different biblical characters, among them, an apostolate in the central column.