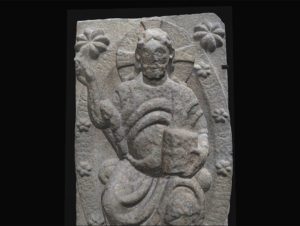 Recently identified with the first project of the Platerías façade in which perhaps it did not come to be placed until an undetermined moment in the first half of the 20th century, when this piece was incorporated into the collections of the Cathedral Museum, it was located in the cresting border of the Treasure façade of the cloister building, where it was probably placed at the time of its construction in the 16th century. It would have been moved from an uncertain location in the cathedral complex.
It is a high-relief plaque representing a Christ in Majesty, blessing with his right hand, carrying a book on the left hand and crowned by a cruciform nimbus, where the inscription REX is still visible, framed within a mandorla shape decorated with stars and in which the inscription BENEDICAT NOS DEXTRA DEI DE SEDES MAIESTAS is preserved. Each end of the slab is also decorated with a star.