Central arch of the façade 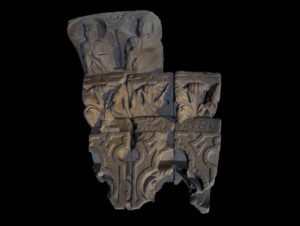 Master Mateo and his workshop. Ca. 1200. Granite
Among the architectural elements recovered, at different times, from the outer façade of the Portico of Glory, it can be found a series of fragments that could correspond to the archivolts that formed its great central arch. Several of these pieces are exhibited in the Cathedral Museum in the assembly of a hypothetical partial reconstruction of the aforementioned arch, which originally measured eight metres and opened the Portico of Glory to the outside.
The great extent of the aforementioned arch caused it to be removed in the year 1520 in order to be replaced by two doors that would allow to close a temple that had remained permanently open until then. With this, the Portico of Glory was boxed behind those doors and mutilated, both in its spatial sense and in its discourse, when several architectural elements and the sculptural ensemble of its façade were removed.