Angel with a scroll 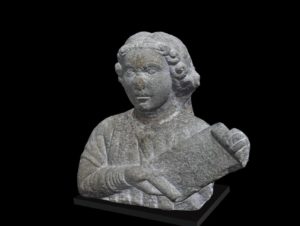 The ceremony of consecration of the cathedral in 1211 also served to establish the conclusion of Mateo’s project that had begun around 1168.
However, the works in the cathedral had to continue and a series of artists trained in Master Mateo’s workshop were in charge, thus expanding his style throughout Galicia and developing a type of art with its own personality that would persist over time. This bust of an angel who holds a scroll at an angle can be attributed to one of those artists trained under Mateo’s influence, a work whose original location is unknown but which would be related to the different projects that would have been carried out in those years in the Compostela Cathedral.